The Church of St. Mary the Virgin - by the Late Dr Brian Wood

The historic church of St. Mary the Virgin is situated by the side of the Great Stour river, although as it is mainly surrounded by trees it is not an obvious feature of the Town apart from the spire.

The church is built of stone, including Kentish Ragstone, flints, bricks and tiles. The stonework in the western tower dates from before the Norman conquest, so the church, in parts at least, is probably over 1000 years old. Its most prominent external feature is the tower, crowned by a cedar-shingled spire which is of the type known as 'chamfered' or 'splay-foot'. The four bells in the tower date from 1624 and 1633.

Inside the church a major feature is the box pews. These could be and were rented out to local families to augment the church funds. The eastern box pew on the north side is the Corporation Pew, with supports for the Corporation's mace, which dates from 1720. Normally this mace is kept securely elsewhere, but each year, usually on the first Sunday in November, it is brought out, together with another mace dating from 1665, at the annual Civic Service. 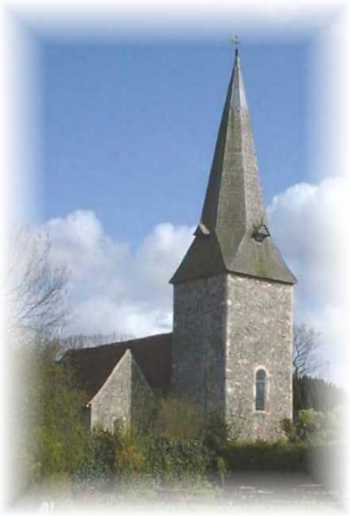 Another major feature is the plaster tympanum, dating possibly from the 16th Century, which used to be in the 14th Century chancel arch, but is now mounted above the arch. The tympanum is inscribed with the Ten Commandments and the Royal Arms of King William III dated 1688, but there are clear signs that the arms of earlier monarchs have been overpainted.

The font is of grey marble, and dates from the 12th Century, although the wooden cover is, of course, of a much later date. The organ is unusual in that although it has only a single manual and six speaking stops it has a pneumatic action, a system which is normally only found on much larger organs. The manual is shorter than usual (4?octaves instead of 5), and the radial pedal board is only 17 notes (2 octaves) instead of the standard 22 notes. It was originally built by Holman in 1867, but was re-built and the pipe-work modified by J.H.Browne of Canterbury when it was installed in the church in 1887.

A curious relic is the Fordwich Stone, carved from limestone in about 1100 and resting by the North wall of the church. It is about 1.7 metres long and is traditionally known as St. Augustine's Tomb. It may have been a shrine, fashioned to represent a dummy tomb, beneath which were placed the relics of a saint (maybe St. Augustine). It appears to have been moved around over the years, and is believed to have been in Canterbury Cathedral for some time before being placed in Fordwich church. A similar stone has been found in Scotland .

Fordwich was a separate parish until 1973 when the Rector, the Reverend Owen Brandon retired. Due to a general shortage of men and money, and the small population at that time of under 200, it was clear that Fordwich was no longer viable as a separate parish. In February 1973 it came under the care of the Vicar of Sturry, the Reverend Peter Gausden, who had also taken over the Parish of Westbere with Hersden some two years earlier. In May 1974 the United Benefice and Parish of Sturry with Fordwich and Westbere with Hersden was created by order of Her Majesty in Council.

In the following years, maintenance of the ancient church proved a very heavy burden on parish finances and, despite great fund-raising efforts by the Fordwich community as a whole, it was finally agreed and accepted that the building should pass into the care of the Churches Conservation Trust. The Trust took over in 1996 and the following year carried out extensive repairs to the church, particularly to the chancel windows. The church is still consecrated, and the parish is allowed to use it six times a year for services such as the annual Civic Service and the Advent Carol Service; it is also used for occasional public meetings and concerts in aid of charities.

Unfortunately the church has to be kept locked as thefts - including a model of a ship of 1470 which did duty as a War Memorial - and other damage took place during the 1990s. However, for anyone interested in looking round the interior of the church, keys can be borrowed at the Fordwich Arms nearby.